When doing game jams, you can easily waste a lot of time fixing one bug, manually build for four or more platforms, upload each to itch only to find there is another critical bug and you have to start all over again. In this post, I’ll explain how to set up continuous deployment so all of this will be done automatically when you push to your git master branch.

At first glance, it seemed like Unity Cloud build would be the obvious solution… However it costs $9 a month, and I only do this as a hobby and I don’t like depending paid services if I don’t have to. Also I haven’t checked if it would integrate well with Itch.

I decided to go for a docker-based solution, and started looking for images. After a quick search it seemed pretty clear that gitlab.com/gableroux/unity3d was the most well-maintained and popular solution.

There seems to be two common ways to set it up, either using gitlab-ci, which is what the official example does, or using Travis and GitHub as explained by Carlos Castro on his blog.

I wanted to do it the most official way to minimize the amount of corner-cases and workaround I would run into, so I went with gitlab-ci, which means you should host your repo on gitlab.com or another GitLab instance.

While the official documentation for setting up was good enough, I found it a bit scattered (i.e. some steps are in the output log of a docker container etc. and some info was in the example readme and some in gitlab issues and some in the gitlab docker image readme. Also I was unfamiliar with GitLab CI, which meant I had to look up a lot of things along the way.

This is why I decided to write this guide, so you (and future me) don’t have to search all over the place, when all you want to do is quickly automate deployment for a new jam game.

Without further ado, here are the steps:

Building and testing with GitLab

Add configuration files to your repo

Now you should be able to go to your project’s pipeline overview to view your new gitlab-ci jobs that are being run. Find it by going to CI/CD->Pipelines. You should see a line there for you newly pushed commit.

Click where it says running to see the details of the individual jobs.

You should now see a graph of all your configured jobs. They should all fail because we haven’t yet configured the unity license. This is what we’re going to do next. :)

Unity activation is a bit of a hassle, and it’s different depending on whether you’re running the pro or free edition. Here I’ll assume you’re a hobbyist/indie and is using the free version.

First you need to get the the license activation file: unity-*.ulf

Finally, paste the contents of your unity-*.ulf file into a new CI variable (not file), UNITY_LICENSE_CONTENT.

Your project should now be ready to be built and tested. Try committing and pushing again, your builds should pass now. You can download the artifacts from the job details and verify that everything worked.

Once again, open up your .gitlab-ci.yml. We’re going to add a new job for deploying to itch.io.

At the start of the file, in the variables section, add the following variables:

At the end of your file, add the following to create a new deploy job:

That’s it. Commit and push to GitLab, and you should hopefully get a mail from itch.io after a while saying the builds are available :) 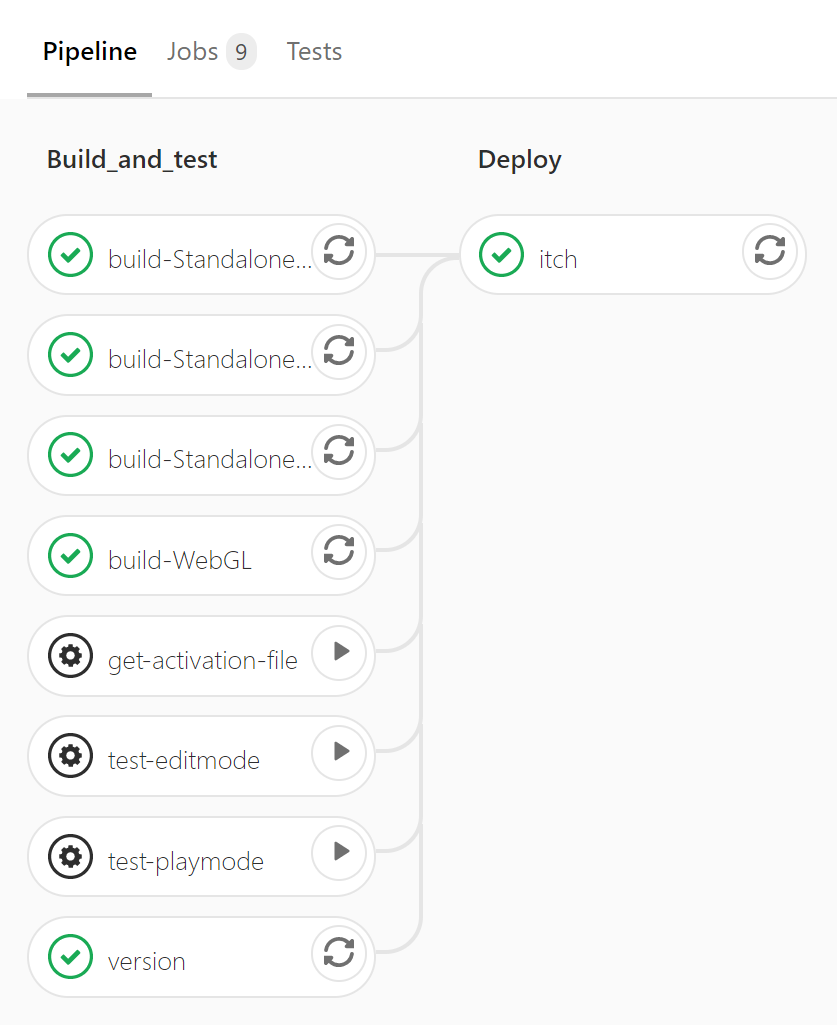 As a bonus: if you don’t like having only the git sha1 as the version and want to have something based on the latest git tag (you need to have at least one tagged commit), you can add a new versioning job:

And change your itch job in .gitlab-ci.yml as follows to use ./version.txt instead:

Now you should have nicer versions, but maybe a convoluted in order just to call git describe --tag. If you have a better suggestion, please let me know in the comments :)